Funding for Physical Education programs is down in many school districts trying to squeeze the most out of dwindling taxpayer dollars. The solution for some of these school boards was to divert money for P.E. teacher salaries and equipment into the regular teaching curriculum to improve standardized test scores as well as save money.

Study after study has shown that physical activity improves both student behavior as well as academic performance; we are only now, however, learning just how this relationship works. In one large study in Naperville, Illinois that took place over several years in one of the largest school districts in the western suburbs of Chicago, student scores in math and science rose significantly among those children who participated in physical activity sessions prior to attending their regular classes. The Naperville study, dubbed “zero-hour” P.E., effectively showed that students who participated in physical activities at the start of the school day performed better in classroom academics and scored higher on standardized tests.

The mechanics behind the mind/ body relationship: 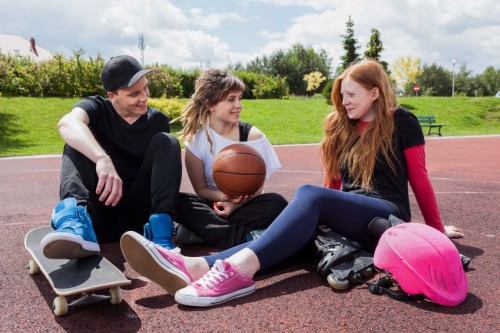 The learning centers in children’s brains do not exist in isolation but as part of a whole, integrated organism. Physical activity improves blood flow to the brain as well as makes a positive impact on hormonal regulation and blood pressure. A study of the effects of exercise on cortisol and dopamine found that a well-designed P.E. program increased the release of the mood-enhancing neurotransmitter dopamine while reducing cortisol, a stress marker. Endorphins are also released upon physical activity; these stimulate the growth of nerve cells in the brain’s hippocampus, increasing production of BDNF, an essential neurotransmitter necessary for proper brain growth and development.

How much time and intensity is needed to show benefits?

The Naperville school district is one of the most affluent in the country; other districts with fewer resources may choose to incorporate activity into an athletics program if participants can exercise at least an hour daily, at least five times a week. Lesley Cottrell, a Ph.D whose findings were presented at the American Heart Association’s 2010 Conference on Nutrition, Physical Activity, and Metabolism, recommended that both children and adults incorporate at least 60 minutes of physical activity daily, with school children participating in age-appropriate activities.

Cottrell’s study involved four groups of students whose physical fitness levels were first measured in fifth grade; those who remained fit from the start through the study’s end at seventh grade showed the highest average standardized test scores in math, social studies, reading and science. Children who were fit at the start but lost fitness came in third, with the children who were the least fit from fifth through seventh grade came in last.

The takeaway for parents and educators:

The conclusion is that the evidence is overwhelming that the mind does not operate apart from the rest of the body but in close tandem with it. Cutting funding for P.E. activities is counter-productive to students as well as a misuse of taxpayer money. A well-run P.E. program benefits not only students but their communities at large as healthy, achieving kids grow up to become healthy, productive adults.

One thought on “Student Fitness and Scholastic Performance?”