When I turned 60, my children and wife decided that if I planned to continue to play in a competitive softball league, with teammates more than half my age, I should seriously consider personal training. So they gave me a gift certificate to the Commonwealth Sports Club for an evaluation with Jack Losey. Little did I know at the time, that six years later I would be training twice a week and feeling that training had become among the most important parts of my life.

After my initial evaluation with Jack I learned that although I was well conditioned in certain areas I was far behind in many others such as flexibility, balance and strength. So began my journey into the world of personal training. All of a sudden, I was faced with words I had never heard of: planks, trap bars, squats, kettle bells, farmer’s walks, tabata and what I grew to dread most, the sled. Even pushing only two plates would leave me winded, sucking air and nauseous. Looking for support I called my son who trains and he says that I must have a good trainer to get to that point! He made me promise not to quit.

Even more important was Jack’s patience and support, always telling me that training is a long term proposition and I would not see significant results until after the first year. Slowly, but surely, I began to feel the change with the challenges becoming something I looked forward to and did not fear. Yet each time I moved forward Jack would move the bar to the next level.

After two years of personal training I could feel my strength growing, conditioning improving and training becoming part of my routine, not an arduous task. Then in the winter of 2012 I went on my annual cross country ski climb in Stowe Vermont that had taken me 90 minutes to complete for the past 30 years and it took only 75 minutes. Real results, as Jack would say.

Building on the first two years and I decided to double the training to twice a week. That is when I could really see the changes. Slowly the plates increased on the sled, the trap bar weights were equaling my body weight and I felt up to the task. But training is always about change and Jack informed me he was moving into more administrative work and cutting down training time and I was being transferred to a new trainer, Chris, who trained college baseball players. Yes, I was still playing in my league, hearing comments that my throws from third base seemed stronger than ever and my running even faster. Teammates would ask how that was possible as I was getting older!

With some trepidation I began training with Chris who introduced new running drills, stop and start drills while building on the basics. But what happened next was intriguing. Chris began to focus on my breathing, teaching me how to breathe though hard exercise and into the exercises. He showed me videos of patterning movements in infants and how adults often need to learn what they have forgotten in physical movements from earlier years. This opened a new path in training.I could do almost four plates on the sled without feeling spent. I experienced a new sense of training in a new dimension. Another winter arrived and I completed my 3.5 k climb in 58 mins with only one stop along the way using the new found breathing techniques. It does not get better than that! Real results cutting off 32 minutes from years past and feeling that will be the best I can hope for.

But alas, Chris tells me he is moving on to study rehabilitation therapy and I am transferred to my third and current trainer, Jim O’Brien. This is less traumatic having changed once before, but again new challenges awaited me that I had not anticipated. Jim leaves stretching and warming up to me and extends the training sessions to a full hour. He introduces rowing to the work out and pushes me harder on the sled. Training takes on new challenges with increasing endurance and cardio. The next thing I know I am approaching five plates on the sled, doing rowing pyramids and rowing sprints and feeling more in the game than ever. As Jim is known to say “think about how you feel at the end of the work out” and I slowly understood what he meant. No longer spent, nauseous or ready to quit but gratified by completing the challenge and looking forward to the next one . And again another New England winter, 2015 comes around and I complete my 3.5 k climb in 48 minutes, no stops along the way having cut the climb time almost in half over five years of training.

Now, as I am looking towards my sixth year of training I look forward to what Jim has in store for me. But more than that I look forward to consolidating the gains and, who knows, perhaps even playing softball until 70 and cutting more time off the annual 3.5 k climb. And maybe even more than five plates on the sled one day and increasing the number of rowing sprints.

Any reflection on personal training would not be complete without acknowledging the supportive environment at this club with a training staff devoted to the trainees and who create a training environment second to none. 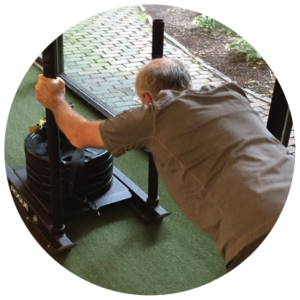 “My biggest challenge? I love food! I have never been one of those people who can view food as fuel and fuel alone. I’m down 20 lbs since I started training. I am not quite at my goal weight yet, but I am feeling great! By focusing on both my diet and my exercise program, I have more energy and I sleep better!” -Amanda